Be the first to own & experience our latest release...

Show Love for "The System" Movie & Support Our Boys

10% of every purchase goes to charities and organizations we we support.

Get all latest showtimes & events delivered to your email. 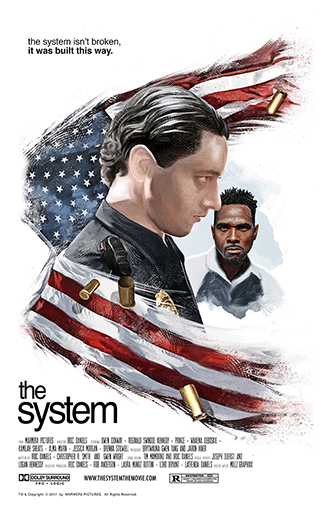 The System The Movie

Vastly different lives and perspectives become intertwined when a police officer suffering from recurring post-traumatic stress disorder shoots a deaf African-American child, exposing layers of corruption and racial tension within the political, judicial and prison systems. After the system fails to bring justice, the father of the slain youth contemplates taking matters into his own hands. His decision leads to a crescendo of exasperation that forever will change the lives of everyone involved.

Written and directed by Iroc Daniels, The System provides a thought-provoking commentary on corruption, racism, and prejudice, as well as the multi-layered intricacies and complexities from both sides of the issues.

Born and raised in Arizona, and living as a Black man in America, I had plenty of motivation for developing this film,” Irin Daniels said. “It comes from pain and frustration. But also it comes from a place of love. While I’m not expecting the film to change minds, I hope it will open hearts. In a word, The System, is about empathy.”

Delivering a timely conversation in an era of social protests, travel advisories and lost lives at the hands of law enforcement, Marmera Pictures releases the trailer to its latest thriller, The System, written and directed by Irin Daniels. The independent film by the Phoenix, Arizona-based production company exposes layers of corruption and racial tension within the political, judicial and prison systems.

Two lives become intertwined when Sam Lynch (Owen Conway), a police officer suffering from recurring post-traumatic stress disorder shoots a deaf African-American child. The father, Nate Wesley (Reginald Kennedy), contemplates taking matters into his own hands after the system fails to bring justice to son. His decision leads to a crescendo of exasperation that forever will change the lives of everyone involved.

“The United States’ Pledge of Allegiance says ‘one nation’, but history has shown that there have been two Americas,” Daniels said. “It is obvious to this day, and it moved me to want to create a film to examine humanity and what ‘liberty and justice for all’ could mean.”

Daniels lives in a state which not only voted for Donald Trump but has had its fair share of controversy, including: being last to pass a Martin Luther King Jr., holiday; enacting strict anti-illegal immigration legislation; banning ethnic studies in public schools, and finding a sheriff guilty of criminal contempt.

Complementing the father-son dynamic of the film, is a soon-to-be-released hip-hop album produced by Daniels. Titled Don’t Listen, the project features Daniels and his son, Marquel Deljuan.